Like most things this year, the National Museum of Women in the Arts’ Reclamation exhibition did not go as initially planned. Curator and director of public programs Melani N. Douglass wanted to treat kitchen labor—the often-invisible daily work that disproportionately falls on women and feminine people—as high art. She envisioned an exhibition centered around kitchen-like spaces physically installed at the D.C. museum. When the pandemic struck, however, the museum moved the show online.

The result is a digital exhibition that may be even more potent than the original. Reclamation went live on January 18th, Martin Luther King Jr. Day, and will be available for the next year. Its homepage features a vibrant photo grid of hands preparing meals on kitchen tables strewn with pink grapefruit, purple onions, and filetted lamb. Each photo represents the work of one of nine female artists, most of them women of color working in multiple disciplines, including Douglass herself. Douglass gave each artist a series of prompts centered around the kitchen: to record herself at the table; to do a time lapse of meal preparation and eating; to take pictures of ingredients; and to record herself doing something at the kitchen table that had nothing to do with food.

In response, the artists produced a lush spread of images and videos evoking the joy of a dinner party with intimate friends. Video interviews with the artists give way to a crowd-sourced catalogue of family recipes and folk magic; a virtual pantry of food lore; and photo essays of the women creating recipes, remedies, and rituals around the kitchen table. The shots are often intimate. We see artist djassi daCosta johnson stretching in her kitchen dance studio; we see her daughter and partner laughing over a game of Scrabble, clay masks on their faces. “Some of the work is unbelievably vulnerable,” Douglass says. Ultimately, Reclamation portrays the daily, often feminine labor of feeding and cleaning, cooking and healing, as nothing short of magic.

Douglass’s interest in kitchen magic began with an act of rebellion. She was in an MFA program for curation when her professors asked what institution she would partner with for her final exhibition. At the time, Douglass was nursing her daughter, interning, and working. She wondered: Why did she need the validation of a prestigious museum? Weren’t the daily rhythms of her life—motherhood, family, food—art?

So Douglass founded The Family Arts Museum, an interactive series of pop-ups and online installations that focus on the family as fine art. “I gave everything up and I was like, no, motherhood is my studio, my community is my gallery, my home is my curated space, my family is my art,” says Douglass. “It was actually an act of marronage.” Douglass’s work draws on Black struggles for dignity and freedom, especially of American marroons, who escaped slavery to build their own communities on the fringes of plantation society, but whose stories are often erased. For many activists and scholars, they evoke Black self-determination.

Around the 2016 election, against a backdrop of increasingly overt racist violence, Douglass shifted her attention to food. She posted a question to her social media followers: “What are some healing traditions that you have?” Friends from a multitude of cultural backgrounds chimed in with foods and cures for times of sickness and sadness. The submissions shared a common theme: basic, nourishing foods, combinations of lemon, liquor, and honey, and bone broths or other soupy foods. Think hot toddies and pastina in brodo, or lemon tea and rasam.

Amid ongoing debates about white people appropriating and profiting from people of color’s cuisines, Douglass saw the act of sharing family connections to food as an opportunity for groups to reclaim what their ancestors had given up in the process of assimilation—or, in the case of Black, Indigenous, and other people of color, what Europeans and Euro-Americans had stolen from them through colonialism and enslavement. She imagined a project that would offer “space for Black and brown people to reclaim their culture without interruption.”

A few years later, that seed of an idea bore fruit in Reclamation. When you enter the exhibition’s recipe archive, you’ll find crowd-sourced family recipes and remembrances, from an Italian family’s crisp, crimped Christmas pizzelles, to a Syrian grandmothers’ kibbeh hamdah, and the round, golden-brown disks of a New Mexican family’s biscochitos. The recipes range from the whimsical, such as a child’s hand-written menu for a boy scout dinner, to the poignant, including a description of the “miraculous” potatoes that saved a family during World War Two.

When you open artist Sharayna Ashanti Christmas’s page, meanwhile, you may feel as though you’ve just entered an electric dinner party from an artist’s memoir. In a grid of photos and videos, Christmas chops a rainbow of tomatoes, sizzles fish and lamb on an outdoor grill, and laughs with a group of fellow creatives in a richly patterned room. “Cooking for me, and cooking ancestrally, is a way of communicating your love for people,” she says. Christmas grew up dancing with the Dance Theatre of Harlem, a historically Black ballet company, and is now a multidisciplinary artist who runs a youth arts nonprofit and a platform that represents, promotes, and sells artists’ of color work. Christmas’s kitchen table and her nonprofits both represent her commitment to creating a future for Black artists and communities “that is centered around what we need,” Christmas says.

Reclamation connects the art of the kitchen table to D.C.-area community organizers working for food justice and health justice, through video interviews with local food activists, wellness practitioners, and herbalists. One interview features Dreaming Out Loud, a nonprofit organizing for food sovereignty for people of color through community-driven neighborhood farms in Black-majority neighborhoods. Samaria King, the group’s farm director, says that working the earth connects her to her ancestors. She was adopted and long felt “disconnected from my ancestral heritage.” “Growing food and working with herbs has been a way to reclaim that knowledge that I was cut off from,” she says. This includes a connection to traditional healing systems. King helps run Dreaming Out Loud’s Mutual Aid Apothecary, which distributes free herbal teas and glycerites to community members.

Reclamation, too, features recipes for home remedies and magic, including cannabis-infused peanut butter cups and a set of stream-of-consciousness instructions for cultivating gratitude. The artists I interviewed all understood cooking as culinary, medicinal, and magical—reflecting an age-old relationship between nourishing and healing. While less common today, most English-language cookbooks as recently as the early 1900s included a range of household “receipts,” ranging from plague cures to pickles and Christmas cakes. Across contexts, women have been respected and feared for their practice of kitchen folk magic, such as the use of cacao to empower and enchant in colonial Latin American and modern-day brujeria, a set of traditional herbal and mystical practices drawing from African and Indigenous American traditions, and most often used by feminine people.

Even when home cooks aren’t explicitly making medicinal recipes, says Douglass, there is a simple magic in the foods everyday chefs feed loved ones when they are most in need. “We’ve all been dog sick and someone has gone into the kitchen and made us something that brought us to the other side of ourselves.” This connection to ancestral folk magic is particularly important for Black, Indigenous, and other women of color in the United States, who have long been harmed rather than helped by the conventional medical establishment.

For several of the artists I interviewed, magic lives in motherhood. johnson’s photo set feels like an intimate family dinner. She’s a dancer and a doula, and talks about parenting like it’s a mix of weaving, cooking, and choreography. Sometimes it is: A friend johnson supported as a doula asked johnson to samba in order to distract her from a difficult labor; 10 minutes after the impromptu dance, the baby came. johnson tells me about one of her daughter’s favorite drinks, butterfly pea flower tea, a deep-blue, flower-based brew that changes to a lovely lilac with the addition of acidic lemon. johnson’s daughter sees the color change as magical. “God made this. Mother Nature made this,” says johnson. “Mother nature made us too.” If something as simple as tea can hold magic, johnson teaches her child, then so can she. “If this can change from blue to purple with just one drop of lemon, what else is possible?”

Douglass calls into our interview with her daughter in the background. Her submission to the exhibition is a video of her daughter making her first pound cake from a family recipe. Cooking and childcare are both often invisible work, done by women and feminine people, many of whom are “taught to be quiet or hide themselves,” says Douglass. But in reality, Douglass asserts, the kitchen holds power—not only to heal ourselves, but to nourish movements for liberation. “Every single social movement that I’ve ever seen started at a kitchen table and food was close by,” she says.

By elevating the kitchen to the realm of fine art, Douglass hopes Reclamation will help teach her daughter, and all young people, that, far from keeping quiet, they should celebrate care work as a source of power. “How do I teach her and any other child in my community, regardless of gender, that there’s power there—and never let anyone dismiss your power, your magic, your nurturing, your relaxation, your healing power,” Douglass says. “I want her to understand that the kitchen is the control panel.”

During a trip she took to Mexico City, locals “rubbernecked and double-took as I sauntered by,” Lisa Pregram writes on the Reclamation website. “Evidentemente, a six-foot Black girl with dreadlocks down to her waist was not a common sight en esta zona.” But she discovered a connection to the city through the story of Elizabeth Catlett, a Black American artist who lived in Mexico, and whom Pregram’s grandmother had adored.

Pregram says this fruit salad, told in her words, was inspired by a particularly lovely breakfast in Mexico City. It evokes a memory of finding pieces of herself in an unfamiliar setting.

Gastro Obscura covers the world’s most wondrous food and drink.

Sign up for our email, delivered twice a week.

15 Keto quick foodstuff you can get nearly anywhere

Fri Jan 22 , 2021
Lots of rapid-food dining establishments by now offer reduced-carb or keto-pleasant variations of preferred foods. Quite a few rapidly-food stuff staples can also be designed keto-friendly by earning some slight adjustments and taking away sure substances. Right here are some examples: Burgers with no bun Burgers are a speedy-meals staple, […] 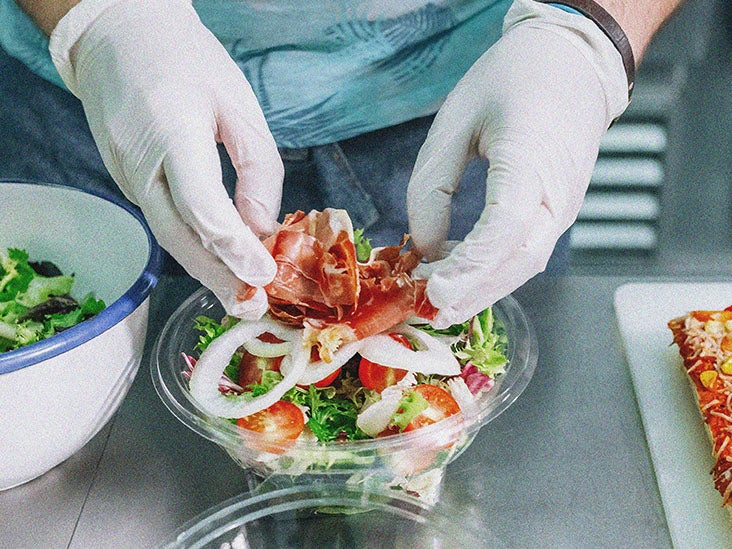